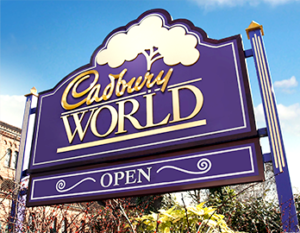 On Wednesday 18th April Year 4 went to Cadbury’s World. We went to Cadbury’s World because we did an interesting topic called Chocolate. In our topic Chocolate we also did Aztecs. We learnt lots more about Aztecs at Cadbury’s World. We went in the park that had a small slide and a big slide and both were twisty. The fun part of our trip was when we got to spend time in the Cadbury’s World gift shop. Lots of children bought loads and loads of chocolate. Some people bought souvineirs and a bit of chocolate. We got to experience a 4D cinema, and our seats moved while we were watching. We had to wear 4D/3D glasses too. We went on a slow ride in a yellow and purple car through Beanville; (Which was filled with cocoa beans with friendly faces on them). We had a talk with a man called Simon. He asked some people to dress up. Sofia dressed up as an Aztec ruler and Tom B and Matthew dressed up as factory workers. Near the end of our trip, we had a cup of Cadbury’s melted chocolate and we got to choose toppings. We chose fudge, marshmallows and buttons. To finish off, we had one last go in the park. It was fun because there was only Glasllwch children in there. Altogether, I really enjoyed Cadbury’s World!!!