We have had chicks in Reception! They were Glinda named after the good witch from the wizard of Oz, Fred named after the chocolate bar Freddo and Cheepy because she cheeped a lot. They were so cute. Every couple of days they were weighed and measured. They were 9 multilink cubes tall last week. Reception did an assembly about them and they cheeped, cheeped, cheeped! They had little marbles in their water so they don’t fall in. They eat little seeds. 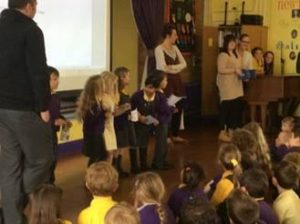