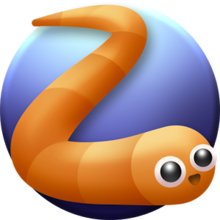 Slither.io is a massivley multiplayer browser game developed by Steve Howse. Players control an avatar resembling a worm, which consumes multicoloured pellets, both from other players and ones that naturally spawn on the map in the game, to grow in size. The objective of the game is to grow the longest worm in the server. Slither.io is simular in concept to the popular 2015 web game Agar.io and is the reminiscent of the classic arcade game snake.