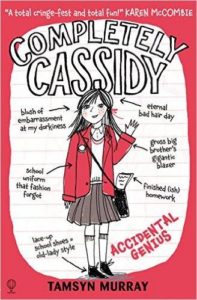 This book is about a girl called Cassidy Bond who has a pregnant mum, loser brother and Elvis impersonator dad. So she is basically invisible in her family. She is now trying to fit in, in her new high school St Jude’s secondary school. But now with the talent show coming will her and Shenice be able to get Molly out of her tantrum. In time and get her brothers band wolf breathern to quit the talent show to save total embarrassment. But with the highest score on the test and earning her a place on this year’s quiz team that will take some effort anyway. As she has a mega crush on this boy called Nathan. Suddenly she is in a world of BFFs, quizzes and boys. I would recommend this book if you like good comedy’s it is hilarious and full of comedy.